If you follow the news of either hi-tech media or music, you already know that Radiohead is selling their new album “In Rainbows” to customers online for whatever they want to pay. A deluxe boxed set is also available for a fixed price of 40 pounds.

Radiohead is on my short list of artists whose new work I buy as soon as it’s released without waiting for any reviews. To be honest, my first few Radiohead CDs were dupes of a friend’s copies, but I liked them enough to buy shrinkwrapped new copies of the next few that came out. The early stuff is a little too Junior U2 for me, and their later work seems like the kind of pretentious drama that should really irk me, but as with so many bands, if we take the lead singer’s histrionics with a grain of salt the package is really well done. I especially love Jonny Greenwood’s awareness that “electronic music” is not something that was invented for dance floors in the 1980s, but goes all the way back to the work of people such as Pierre Schaeffer, who was recording machinery and then cutting up and gluing bits of recording tape together in the 1940s, generations before any talk of sampling or mashups. Their balance of strange noises with crunchy power chords continues a legacy that goes back to Roxy Music’s first album, only with much better guitar playing; for a great example of a rocking Radiohead kick-in, see what happens at 2:49 of this YouTube video of “Paranoid Android”. (The song is from “OK Computer,” an excellent Radiohead album to start with.)

Regular trips to Oxford for the XML Summer School also make me a fan, because they’re an Oxford band—the city, not the university, contrary to what allmusic.com says—and apparently they still live there. John Chelsom told me that while taking his son for a walk in the park, he passed Thomas Yorke doing the same, and they gave each other the little “here we are, dads pushing our prams among all these moms and nannies” nod. I would trade that for both my stories of passing local boy Dave Matthews in downtown Charlottesville any day. (I guess he’s also a big fan—he wrote in Rolling Stone magazine that “Listening to Radiohead makes me feel like I’m a Salieri to their Mozart”.)

Go to radiohead.com or radiohead.co.uk and you’ll be redirected to inrainbows.com. After clicking through some screens to indicate that you want to download a copy, you get this: 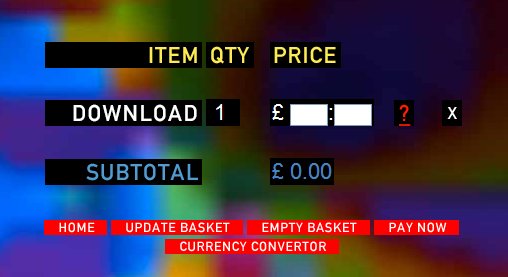 Clicking the question mark displays this:

Another question mark, another reassurance:

I decided that my magic number for how much I wanted the album was $10, a nice round figure a few bucks less than what a hard copy CD and booklet would cost. Radiohead is so British that regardless of where you hit their website from, you have to pick a figure in pounds sterling. Unfortunately for us Yanks, the math is only too easy these days: divide the dollar figure by 2, so I entered 5.

I’m listening to the album now, and it was worth every p.

Hi, Bob…you’ve convinced me to jump onto the historical bandwagon…I’ll download tonight. BTW, did you see the article (I found it on slashdot) that most downloads thus far have been for nil? It’ll be interesting to see how this plays out.