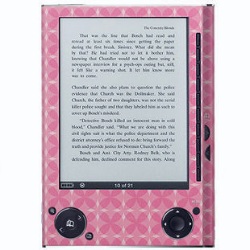 When discussing eBooks, some people think they’re making a clever point by announcing that they’d never want to curl up by the fire with an eBook reader. This is just useless, because the idea of eBooks replacing all bound paper books was never up for consideration. I’m sure that if I want to lie on the beach in 2018 and read Don Quixote, I’ll be reading a paperback. However, a new electronic medium can replace certain uses of bound books, and the trick in finding opportunities is to identify them.

I’ve worked with electronic delivery of content since I was at RIA in New York thirteen years ago, converting SGML to CD-ROMs of primary and secondary tax law for accountants and tax lawyers. Since Lexis went online in 1973, finding an audience that will benefit from a new delivery format has usually meant finding people in a specific job title with certain kinds of work to do. Whether you’re a lawyer looking up legal decisions or a maintenance engineer crawling around the engine of a jumbo jet, you often need access to a page or two from a large amount of content, so some sort of electronic delivery is often more convenient than getting to (and for the publisher, updating) a big set of bound books for such information.

So, people with specific technical needs have been popular target markets for new electronic media. But what could be less technical than housewives reading romance novels? At the recent O’Reilly Tools of Change conference in New York City, the talk by Brent Lewis of Harlequin Enterprises really opened up everyone’s assumptions of what could be done in the eBook market.

I had to leave his talk before it ended to call in to a meeting, but I managed to catch Brent on the exhibit floor the next day. Harlequin started off with nine eBook titles per month in October of 2005, and by September of last year they were publishing their entire frontlist in eBook format as well as paper format. That’s a lot of books: over 120 per month. They’ve done a lot of slice-and-dice eBooks as well, compiling backlist greatest hits (Out-of-Print Gems), seasonal compilations (Stocking Stuffers) and themed compilations such as the Bundle of Brides title.

Lewis said that their books are available in “all six formats,” which I assume means Adobe Digital Editions, Microsoft Reader, and Mobipicket (according to their eBook Boutique help—and don’t miss this page, which can teach everyone plenty about how to acclimate a suspicious audience to eBook usage), Kindle, Palm format, and the Sony Reader. For Valentine’s day, they even worked with Sony on a special pink version of the Sony Reader bundled with 14 romance novels on it.

Almost two years ago they brought the Japanese trend of serializing novels to mobile phones to the United States with their Harlequin On the Go™ series, sending 500 words a day to Sprint and Verizon customers who subscribe to this service. They also distribute through dailylit.com, which serializes books via RSS and email.

In my own talk about Strategies for entering the eBook market the day after Brent’s talk, I pointed out how Harlequin should be an inspiration for anyone thinking about a move into the eBook market. What they did, who they did it with, and how they did it is worth a close look to anyone who wants to learn about the potential for eBooks.

All formats, that is, except honest PDF.

This brings up an interesting point: their help page refers to “Adobe® Reader®/Adobe® Digital Editions format”, but in the Digital Publishing Beyond eBooks talk by Adobe’s Bill McCoy just before mine, he described how ADE can read both PDF and epub files, and how Adobe is basing a lot of strategy around these two formats. The eHarlequin page doesn’t say which they’re using, but it does describe their use of PDFs with DRM (as opposed to what I assume you mean by “honest PDF”.) On the other hand, the new president of the organization responsible for epub came there from Harlequin, so they must find it attractive for something.\