I’ve always been a bit confused by the various library-related metadata standards. Recently while researching one of them I found an excellent PowerPoint presentation summarizing most of them by the OCLC’s Eric Childress called Metadata Standards. (While I’m on the subject of the OCLC, don’t miss The Onion’s mention of them last August.) He has individual slides on MARC 21, MODS, METS, ONIX, EAD, MIX, and more. He gets bonus points for adding descriptive comments to his slides, which too few people do. 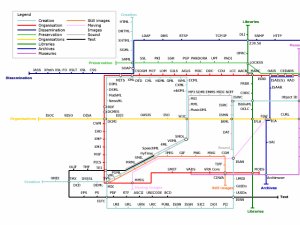 His third slide’s list of five types of metadata (Descriptive, Technical and Structural, Administrative, Rights, and Management) is something that one could quibble with, but he’s talking about his domain, which he knows better than I do. Without even getting to grouping of metadata categories, just the definition of metadata can be very subjective—I was once in a meeting where, after one participant described what “metadata” meant to his group, someone else responded “That’s not metadata! That’s control data!”

Childress’s sixth slide illustrates the relationship between various standards and organizations as a subway map with color-coded subway lines representing different groupings of standards, organizations, domains, roles, and other concepts. An SVG-based interactive version of the same map links each acronym (and of course, it’s pretty much all acronyms) to descriptive text and relevant links for that acronym.

It’s a pretty handy reference. I know I’ll be coming back to it, if only when I get to my New Years resolution of “write GRDDL XSLT for a few standard metadata formats.”

With the only valid SVG that I tried displaying with Firefox 2.0, it showed the XML source, not the image. That same example, and the subway map, did display using IE with Adobe’s SVG add-in.\