I’ve been hearing about proximity beacons lately and thought it would be fun to try one of these inexpensive devices that broadcast a URL for a range of just a few meters via Bluetooth Low Energy (a.k.a. BLE, which I assume is pronounced “bleh”). Advocates often cite the use case of how a beacon device located near a work of art in a museum might broadcast a URL pointing to a web page about it—for example, one near Robert Rauschenberg’s Bed in New York’s Museum of Modern Art could broadcast the URL http://moma.org/collection/works/78712, their web site’s page with information about the work. When the appropriate app on your phone (or perhaps your phone’s operating system) saw this, it would alert you to the availability of this localized information.

You can find these beacons for as little as $14, and even cheaper on eBay, where colorful bracelet versions can cost less then $10. Most need batteries, typically the kind you put in a watch, so to avoid this I got a RadBeacon USB from Radius Technologies that draws its power from any USB port where you plug it in. At the right you can see mine plugged into a conference swag phone recharger.

I also chose this one because it supports Google’s Eddystone open beacon format, Apple’s iBeacon format, and Radius Network’s AltBeacon. I haven’t dug into the pros and cons of these different formats yet; I just wanted something that was likely to work out of the box with both my Samsung S6 Android phone and my wife’s iPhone. The RadBeacon USB did fine.

You configure it with a phone app built for that particular beacon product line. The Android RadBeacon app generally worked, although I often had to press “Apply” several times and restart Bluetooth before new settings would actually take hold. Its documentation shows the kinds of properties it lets you set, such as the URL to broadcast and the Transmit Power (which affects the battery life and the distance that the URL is broadcast—in a museum, you want people receiving the URL of the painting in front of them, not the one twenty feet to the left of it).

I had set mine to the URL of a sample web page that I created for this purpose. While waiting for my RadBeacon to arrive in the mail, after Dan Brickley tweeted the mobiForge article Eddystone beacon technology and the Physical Web, I learned a lot from it about which components of my web page would be picked up by an app that received the broadcast URL.

After I configured the beacon, the open source physical web app found it and displayed the following on my Samsung S6: 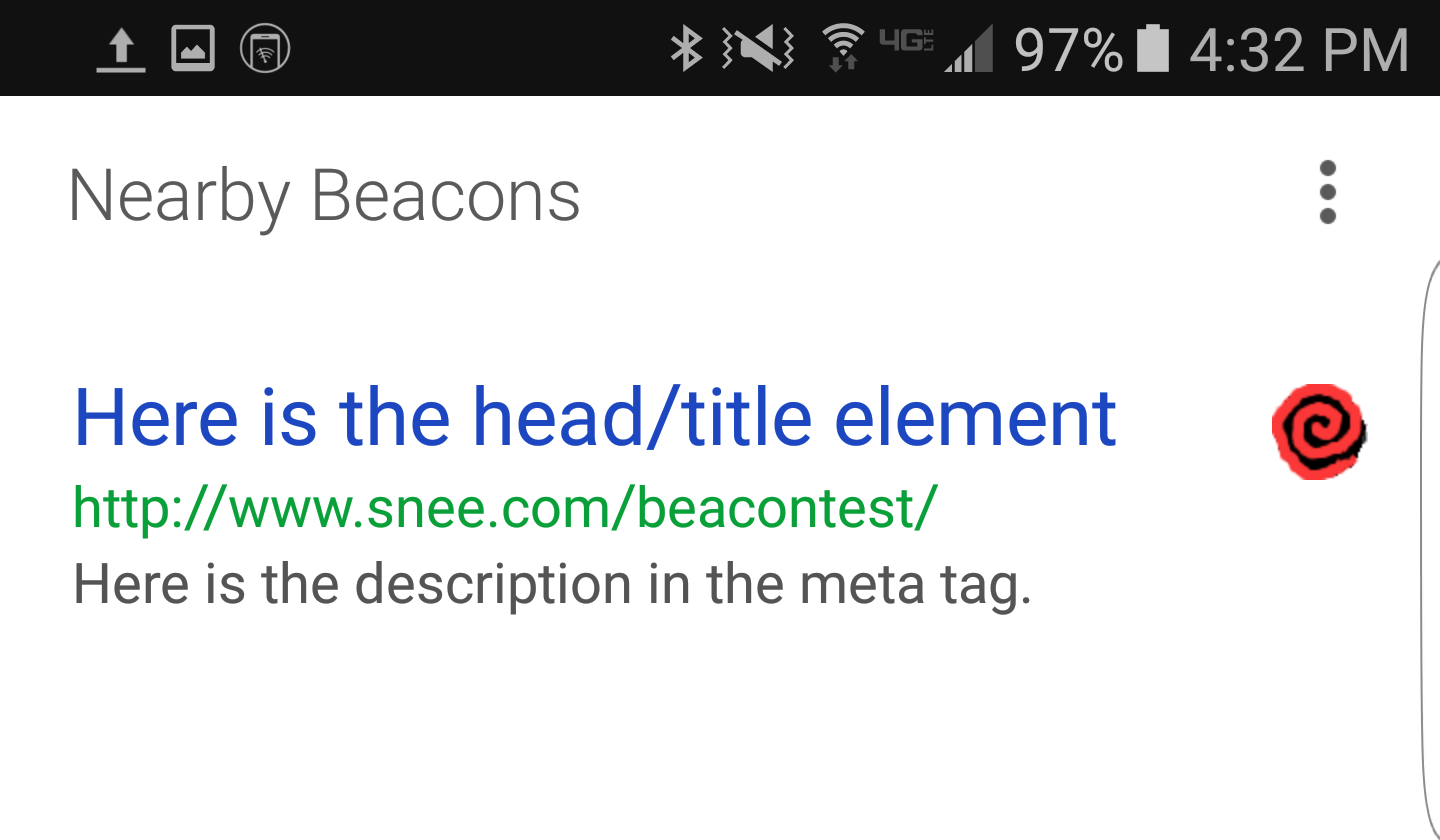 Tapping the blue title took the phone to the web page. This all worked the same, with the same app, on my wife’s iPhone.

I don’t want to have to bring such an app to the foreground every time I want to check for nearby beacons, so I was glad to see that the app also added something to my phone’s notifications list:

Touching the notification sent the phone to the referenced web page.

Both notifications above show what the app pulled from my sample web page: the content of the head element’s title element and the value of the content attribute from the meta element that had a name attribute value of “description”. They also displayed the hastily-drawn favicon image I created for the web page.

A beacon won’t broadcast just any URI that you want, because the allowable length is somewhat limited. (This could vary by beacon product.) The article mentioned above describes the role of URL shorteners in the architecture. Still, the idea of such inexpensive hardware using URIs to identify things brings a nice semantic web touch to an Internet of Things architecture.

One experiment I tried was the use of Audio Tag Tool to add every metadata field available to an MP3. I then configured my beacon to broadcast that MP3’s URL, but none of the metadata showed up on my phone’s display. I thought that the idea of location-specific audio might be interesting. (You could also implement location-specific audio with much older technology—for example, Victrolas—but the ability to control the audio from a central server could lead to interesting possibilities.)

The museum use case for beacons is nice and cultured, but I wonder about the attraction of a technology whose real main use case for now is to pump ads at people. (When was the last time you scanned a QR code with your phone?) I say “for now” because I remain hopeful that creative people will come up with more interesting things to do with these, especially if they dig into the Eddystone, iBeacon, and AltBeacon APIs. For example, you could add features to your own apps to check for or even act as beacons, communicating with other beacons and apps around your phone whether these devices had Internet connections or not. The Opera browser’s use of schema.org metadata stored in web pages referenced by beacons is also promising, and I know that Dan is putting more thought into what role schema.org can play.

The idea of the broadcast URL showing up as a notification on your phone that you can follow or ignore is much simpler than starting up a special app on your phone and then pointing the phone at one corner of a poster, which the QR enthusiasts thought we’d be happier to do. The short article 5 Common Misconceptions About Beacons and Proximity Marketing gives a good perspective on where beacons can fit into the communications ecosystem in general and the world of marketing in particular. The article is from one of several companies building a business model around advertising via beacons, but like I said above, I hope that the APIs inspire other users for them as well.