Many of us have waited years for an open-source framework that makes the development of web-based RDF applications as easy as Ruby on Rails does for web-based SQL applications. This dockerized version of Wikibase looks like a big step in this direction.

I have minimal experience with docker. As instructed by wikibase-docker’s README page, I installed docker and docker-compose. (When I got to the Test Docker Installation part of the Get Started, Part 1: Orientation and setup page for setting up docker, the hello-world app gave me a “permission denied” problem, but this solution described at Techoverflow solved it. I did have to reboot, as it suggested.)

Continuing along with the wikibase-docker README, when I clicked “http://localhost:8181” under Accessing your Wikibase instance and the Query Service UI it was pretty cool to see my own local running instance of the wiki: 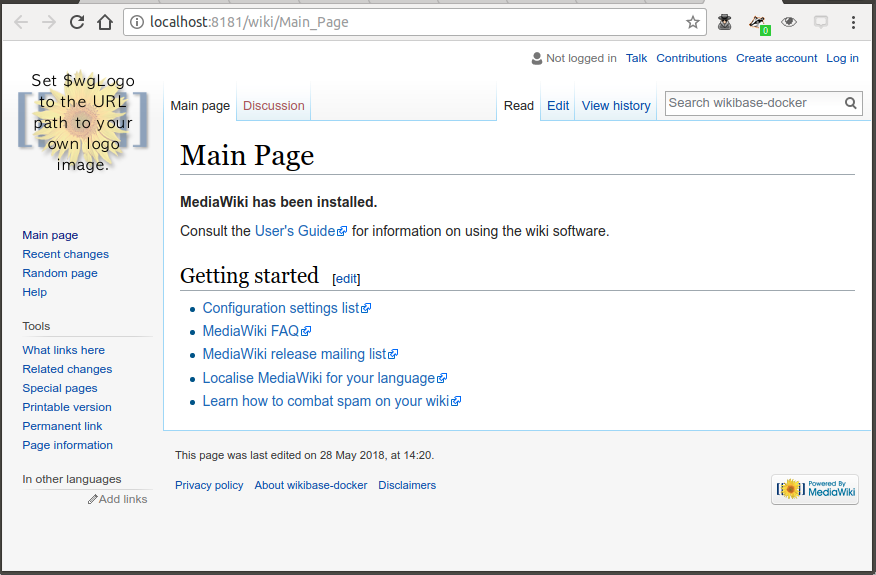 Moving along in the README, I clicked “Create a new item” before I clicked “Create a new property”, but when I saw that the new item’s property list offered no choices, I realized that I should define some properties before creating any items. Properties and items can have names, aliases, and descriptions in a wide choice of spoken languages, and Wikibase includes a nice choice of data types.

After defining a property and creating items that had a value for that property, the “Query Service UI @ http://localhost:8282” link on the README led to a web form where I could enter a SPARQL query. I entered SELECT * WHERE { ?s ?p ?o} and saw the default triples that were part of the store as well as triples about the items and property that I had created.

The “Get an RDF dump from wikibase” docker command on the README page did just fine. Reviewing the triples in its output, I saw that the created entities fit the Wikidata data model described at Wikibase/DataModel/Primer, which I wrote about at The Wikidata data model and your SPARQL queries.

It took me some time (and a tweet) to realize that the “Query Service Backend (Behind a proxy)” URL listed on the README file was the URL for the SPARQL endpoint. The first query I tried after that worked with no problem:

It was also easy to access this server from my phone across my home wifi when I substituted the machine’s name or IP address for “localhost” in the URLs above. The web interface was the same on a phone as on a big screen; the MediaWiki project’s Mobiles, tablets and responsive design manual page describes some options for extending the interface. If someone out there is looking for UI work and has some time on their hands, contributing some phone and tablet responsiveness to this open source project would be a great line on your résumé.

And finally, while the docker version of this is quick to get up and running, if you’re going far with your own MediaWiki installation, you’ll want to look over the Installation instructions for the regular, non-docker version.

After I did these experiments and wrote my first draft of this, I discovered the medium.com posting Wikibase for Research Infrastructure – Part 1 by Pratt Institute librarian and researcher Matt Miller. His piece describes a nice use case of following through on creating a Wikibase application and points to some handy Python scripts for automating the creation of classes and other structures from spreadsheets. His use case happens to be one of my favorite RDF-related available data sources: the Linked Jazz Project. I look forward to Part 2.

It’s great to have such a comprehensive system running on my local machine, complete with a web interface that lets non-RDF people create and edit any data they want and, for the RDF people, a SPARQL interface to let them pull and manipulate that data. For more serious dataset development, the MediaWiki project includes some helpful documentation about how to define your own classes and associated properties and forms. (July 20th note: that page is actually about Semantic MediaWiki, which I played around with a few years ago–apparently I didn’t keep my notes on that and Wikibase as organized as I should have.)

Many of us have waited years for an open-source framework that makes the development of web-based RDF applications as easy as Ruby on Rails does for web-based SQL applications. The dockerized version of Wikibase looks like a big step in this direction.