When people started retroactively applying the term “psychedelic punk” in the late seventies, the late sixties Texas band the 13th Floor Elevators were among the first to earn the title. Tom Verlaine’s band Television covered “Fire Engine” live, but the Texas band’s most well-known song (mostly because of the Nuggets compilation that everyone had) was “You’re Gonna Miss Me”. I’m not sure whether it’s annoying or just trippier that Dell used it in an ad recently, but it was a thrill for me to see them lip synching it at a pool party on YouTube.

They look like sixties frat boys, but Roky Erickson looks like a pretty intense frat boy, and he apparently got weirder and weirder from that point on, eventually ending up in a hospital for the criminally insane. According to Wikipedia, Texas musicians ranging from Butthole Surfer King Coffey to ZZ Top’s Billy Gibbons have worked to get Erickson good treatment and a renewed musical career recently. 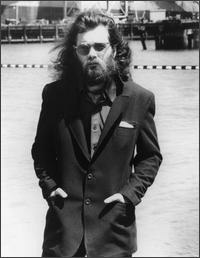 I think I spotted a three celebrity cameos: Jerry Lewis and Condi Rice are bopping and grooving poolside, and Dee Dee Ramone is a-rockin' in the rocking chair off to one side.