I always thought that free XML editors (and some commercial ones) were limited to two display modes: 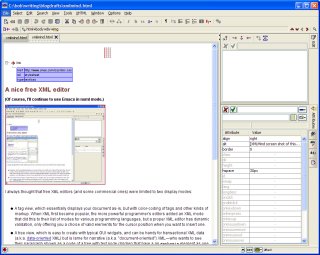 A word processor-like view, which distinguishes between block and inline elements and displays each according to some hopefully straightforward specification, seemed like the province of more expensive editors such as Arbortext and XMetaL, but I recently discovered Pixware’s XMLmind. Their free “Personal Edition” is available for both Windows machines and Macs. It uses CSS stylesheets to style the documents that you create as you edit them. Pixware offers a Professional Edition for $250 that has more features such as on-the-fly spell checking, but the free one still has a spell checker (with a wide choice of dictionaries, because it’s from a French company), and comes with CSS stylesheets for several popular document types.

It worked just fine with my own HTML CSS stylesheet that I use for writing things like this. I might even suggest that someone uninterested in XML but who wants to learn about web page creation use it with the XHTML DTD and CSS. You can’t beat the Personal Edition’s price.

I’ll continue to use Emacs, because I do want to see the markup, and I have too much affection for nxml mode, all the other off-the-shelf Emacs features, and the ones that I’ve developed myself. To proofread, I add an xml-stylesheet processing instruction and then view the document in Firefox. For people who are interested (or have friends or clients interested) in interactive editing of styled XML documents without spending any money, though, XML Mind is worth a good look.

a now free SGML/XML editor. It can also be scripted using tcl.

I’m impressed that it can edit SGML, but the website doesn’t show many screen shots, and the main one only shows a tree view and a tag view. Is there a formatted view?

I think it uses ths SP libraries for its SGML cabability either way I’ve had this editor correctly pick treat SGML documents where the Arbortext editor failed.

There is a formatted view, you can style using its own XPATH/CSS like language which can be saved as templates, and view with or without tags, however I would not say it allowed the most sophisticated styling. It does have CALS table editor.

On a Linux platform it seems to lack antialiased fonts although I think this is due to its Tk underpinings.